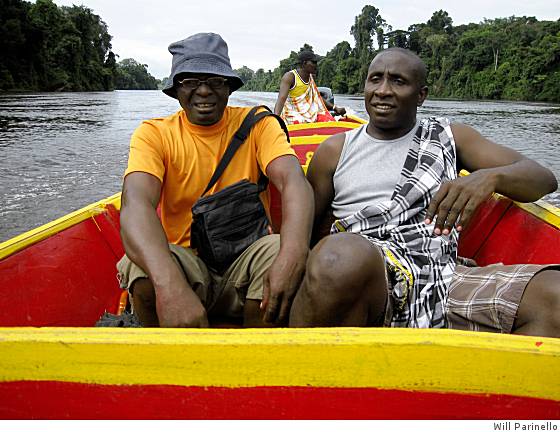 I remember the first time I became familiar with the country of Suriname.  I was listening to a Donnie McClurkin song that is a language medley psalm.  He sings in the language of a number of countries in this beautiful praise song.  Donnie then names Suriname and sings in their language “Surinamese” as he calls it!  Of course, I am intrigued because I had never heard of the country.  Thanks to Donnie McClurkin, who starts my interest in Suriname.   As I began my research, I found out that there is a large population of African people in this country!  Of course I’m surprised and highly interested to know more about my black brothers and sisters, who I found out were black maroons, descendants of those Africans who ran away from brutal South American enslavement on the sugar cane plantations.

These black people who call themselves the Saramaka struggled and succeeded in rebuilding their culture and life for themselves deep in the rainforests of Suriname.  They fought for and won their liberation from the Dutch, negotiated treaties with the Dutch for ownership of the land which is some of the most unspoiled rain forests in South America.  They have lived their for all these centuries, but no good thing lasts, and the world has finally found the bounty that is Suriname. 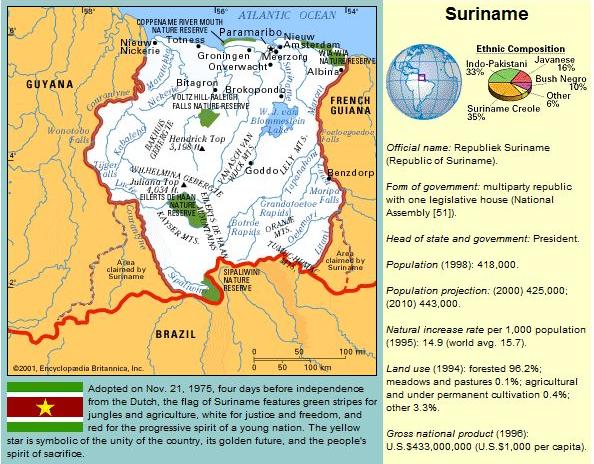 Suriname is a racial mixed country and is a poor nation by western standards.  As the Chinese and others have come in to log the trees, Suriname has been faced with the money they are offered for logging rights and the poverty and underdevelopment of their country.  The government has started selling the rights of the forests to the Chinese and others, who are quickly decimating huge tracts.  Onward, Progress!

The only problem is that the Saramake owners of the land never gave the government permission to sell out their land rights.  The black folks feel they are the rightful and legal owners and have the ancient treaties to prove it.  Of course the government sees it a bit differently.

These two videos are very informative!! You have to watch them on Youtube though, embed is disabled and popup blocker is in efffect as well.  Keep clicking.   Don’t let that stop you.     🙂

In terms of their culture, it’s interesting how the Saramaka people structured and build their society after escaping slavery.  Saramaka society is firmly based on matrilineal principles. A clan (lo) – often several thousand individuals – consists of the matrilineal descendants of an original group of liberated ex-slaves. It is subdivided into lineages (bee) – usually 50 to 150 people – descended from a more recent ancestress. Several lineages from a single clan constitute the core of every village.

Land is owned by these matrilineal clans (lo), based on claims staked out in the early eighteenth century as the original Maroons fled southward to freedom. Hunting and gathering rights belong to clan members collectively. Within the clan, temporary rights to land use for farming are negotiated by village headmen. The establishment of transmigration villages in the 1960s led to land shortages in certain regions, but the success of the Saramakas in their lawsuit against the government of Suriname will now permit them to manage their lands with less outside interference.

Matrilineal principles, mediated by divination, determine the inheritance of material and spiritual possessions as well as political offices. Before death, however, men often pass on specialized ritual knowledge to their sons.

The Saramaka people, like the other Maroon groups, are headed by men. The 2007 ruling of the Inter-American Court for Human Rights helps define the spheres of influence in which the national government and Saramaka authorities hold sway.

Saramaka society is strongly Egalitarian, with kinship forming the backbone of social organization. No social or occupational classes are distinguished. Elders are accorded special respect and ancestors are consulted, through divination, on a daily basis.

I’m always amazed by the continuous struggle that my black people have waged for their freedom wherever they are in the world.  We are a people who have a fighting spirit coursing through our veins!  It’s in our blood!

Spend Your Two Cents With Me! Cancel reply